I don’t know what to say – understanding grief and loss

I am re-sharing this blog which I wrote a few years ago about grief and loss.  It’s a tough subject to tackle, no time more than now when all of us, including our children may have known someone who had passed away as a result of this pandemic. Just the other day I was speaking to a parent whose son’s maths teacher died suddenly during the first lockdown. An incredibly challenging time for young minds, and something that is hard for us adults to even begin to make sense of or understand.  What is also really important to recognise too, is that even if we did not actually know the person who died, we can still be affected by this, especially in the situation we are in right now. We all need to support each other through the coming months and years around this difficult issue, which is why I wanted to share the words I wrote.

Finding the words can feel hard.

I get it, finding the words which can ever feel supportive enough, or help in any way can feel impossible when someone has lost a baby or child. It can feel overwhelming for you, as a person involved in this situation, so to try and even begin to appreciate how that parent, sibling, or family member is feeling may seem impossible.

We know that words can not ever begin to even adequately compensate for their loss, or their grief, and often that stops us saying, or doing anything at all.  We worry about saying the wrong thing, in the wrong way, and upsetting someone further.  When my close friend died 4 years ago after a long battle with cancer, the hardest thing in the world was to know what to ‘say’ to her grieving husband and 9 year old daughter. So I didn’t, I sat, I listened and I held space for him to talk, if he wanted to. We gave his daughter space to be with our boys and just play, just be with them, no-one asking her questions or expecting a response, I remember them spending most of the time playing football.

My point is that we put ourselves under huge amounts of pressure to do, or say something to ‘help’, even though we feel powerless to help and then we end up saying nothing at all.

As hard as it is to comprehend, sometimes the ‘just being there’ is the most important, the talking about the loss of their baby, their child or their parent, not in terms of the loss but about the memories of the baby, or child, or adult.

When one of the women I was supporting several years ago lost her baby during labour, I was invited to go to the funeral. I felt immensely privileged to have been asked. This was tough, as it was at the church where I had been married and my first son christened.  I was on my own, as a professional who had been supporting the family, and I gathered my strength together and went. Before I did go I considered what may be a suitable gift to take with me and what to write in the card to express my sympathies.  I did not want to take flowers, I wanted to take something which lasted.  So I gave the mum a notebook, with a card in which I wrote the qualities their baby would embody, from both of her amazing parents and the memories which I had of our time together during the couples pregnancy.  It felt like a small, insignificant thing but it was a way of contributing to their daughters memory.

I get it, what I am writing here is likely to make readers feel sad, and emotional. But in my book emotions, whether they are considered good or bad, are an expression of what we need to feel, and release, not bottle up inside so it all comes out in one go like an unexploded bomb.

So how can Hypnotherapy help?

Talking about hypnotherapy for anxiety may seem irrelevant here, but it really isn’t.  Often the journey of grieving for a loved one takes many twists and turns, ups and downs, and we have to adjust to these ever changing emotions.  When I support grieving adults and teenagers my first approach is to ‘hold space’ for someone to just feel heard, and listened to.

Friends and family can often struggle to ‘hold space’ because they have their own overwhelming feelings and emotions which they are trying to deal with themselves.  I experienced this first hand with my friend.  Whilst a number of my friends were there immediately after her death, they struggled to give me the space, and time to grieve in the way that I wanted to, by talking about my friend, all the time.  This was by no way a criticism of them, or their own way of coping, just that our approaches in dealing with her death were vastly different.

The supportive people in my world at that time were my husband, who was mindful of his own support of her husband, and my work colleagues, who, like me, work within difficult and challenging situations with people, supporting them and listening to them and were able to put their own feelings aside to listen to me just be me. I also accessed impartial support from CRUSE Bereavement Care who gave me the space, and understanding to express how I was feeling at the time.

And the ‘hypnotherapy’ part? I class this as giving people the head space to grieve, permission to feel however they need to feel in the moment. Hypnosis is simply deep relaxation, where we ‘give the brain a break’ and space to process overwhelming emotions and feelings.  It does not take that feeling of grief away, nothing can, but time spent in this space can soothe the mind and release some of the overcrowding in our head when we are trying to understand something we just can’t make sense of.

Breaking the silence which surrounds grief and loss is vitally important. Often symptoms of anxiety, and depression emerge when our emotions are not given the space to be heard, and processed. Panic attacks, overwhelming anger and frustration can often be symptoms of not feeling heard, or understood, especially in relation to the loss of someone close to us.

So, my message to you in relation to this difficult emotive subject is this.  You don’t have to use words to be a support to someone who is grieving. You can just be there.  Often people, teenagers included, will not know what help they want or need, so they are unlikely to be able to tell you. One of the most poignant moments for me was when the mum who had lost her baby in labour asked to come back to see me for a session.  There I was absolutely nothing I could do to alleviate the deep sense of grief she was experiencing, but I could talk to her about her daughter.  I cried after the session, and experienced all those normal human emotions but I also felt absolutely privileged that she came back to be for support.

Do not feel that your actions, however small, are inadequate. They may not appear to be noticed, or acknowledged, but they are there, and they are your expression of your love and support for that person who is grieving in their own way, and in their own time. 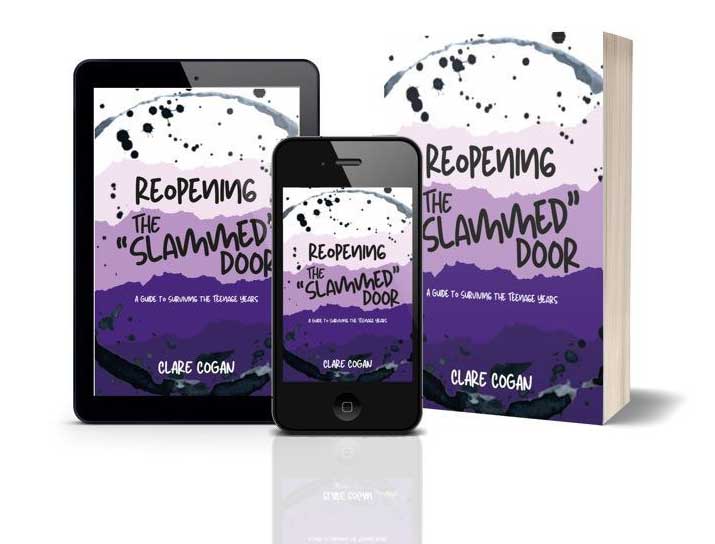 The teenage years can bring up all kinds of challenges for young people, their parents and the entire family. And as a mum to two teenage boys, I know we all could do with a gentle go-to guide to help us navigate the ups and downs of these tricky times.

That’s why I wrote this book. Based on my professional experience, my growing expertise in the field of teenage mental health, and reflections on my teenage years, I have created a digestible blend of practical, helpful, informative advice

Get all my support, tips, events and workshops information direct to your inbox.

We use cookies on our website to give you the most relevant experience by remembering your preferences and repeat visits. By clicking “Accept All”, you consent to the use of ALL the cookies. However, you may visit "Cookie Settings" to provide a controlled consent.
Cookie SettingsAccept All
Manage consent

This website uses cookies to improve your experience while you navigate through the website. Out of these cookies, the cookies that are categorized as necessary are stored on your browser as they are essential for the working of basic functionalities of the website. We also use third-party cookies that help us analyze and understand how you use this website. These cookies will be stored in your browser only with your consent. You also have the option to opt-out of these cookies. But opting out of some of these cookies may have an effect on your browsing experience.
Necessary Always Enabled
Necessary cookies are absolutely essential for the website to function properly. This category only includes cookies that ensures basic functionalities and security features of the website. These cookies do not store any personal information.
Non-necessary
Any cookies that may not be particularly necessary for the website to function and is used specifically to collect user personal data via analytics, ads, other embedded contents are termed as non-necessary cookies. It is mandatory to procure user consent prior to running these cookies on your website.
SAVE & ACCEPT